Prior to joining Growthgate Partners as a co-founding Partner, Mr. Doumani was the senior advisor to Mizuho International in the Middle East for Investment Banking and Export Financing Services. Mr. Doumani started his financial career 30 years ago at E.F. Hutton at the time, as account executive, where he became licensed member of the New York Stock Exchange and NASDAQ.

Mr. Doumani moved to New York in 1982 where he joined Sharjah Group, an investment company lead by Sheikh Naser Sabah Al Ahmed of Kuwait capitalized at US$300 million at the time. He was given the responsibility of the direct investments in the company for USA where he was seconded to the President of Donaldson Lufkin and Janneret, Mr. Carl Tidemmen. He supervised the investment there for almost two years, where he was involved in evaluating real estate, among other things like investing in the film industry, and capital venture in silicon valley.

In 1985, Mr. Doumani returned to London and became the asset manager of the Sharjah Group for American and Asian stocks, he managed over US$100 million at the time.

In 1988, he moved to Nomura International in London where he set up a Middle East desk for Corporate Finance, Asset Management and Investment Banking, and became the vice president for Nomura Middle East.

In 1993, he was recruited by the Carlyle Group to set up their Middle East operation out of Dubai. During his tenure with Carlyle he introduced the private equity to the private sector in the Middle East and increased Carlyle exposure and recognition in the area.

In 1997, Mr. Doumani established his own advisory firm where he assisted in expanding the Hard Rock Café Middle East, and became a board member of the company. He helped introducing and expanding the business of Nespresso in the area, and created a chain of restaurants like Henry J Beans. In addition to that, he was advisor to Investcom for two years where he was behind financing the Ghana license, and helping in the Yemen partnership.

In 2000, Mr. Doumani moved to Morocco where he opened a Tiffany & Co shop and carried the luxury brands in the shop like Lalique and other jewelry and watches and expanded the business in Morocco to four shops of high end brands like Façonnable, Villeroy and Boch alongside the existing ones. Additionally he opened more retail stores in the food business, creating a “VIP” catering and ended up selling the business.

In addition to his professional advisory role with Mizuho International, Mr. Doumani has formed in the year 2000 a medium size entrepreneurial fund which has raised capital from regional investors and participated in establishing various businesses throughout the Middle East, including setting up and managing internationally branded food and beverage chains and consumer goods (Hard Rock Café and Henry J Beans in the UAE), the structuring of participation in real estate investments (Lebanon), the part-financing and founding of new telecom ventures (Investcom in Yemen and Ghana) and the establishment and management of high-end retail outlets (Tiffany’s, Lalique and Façonnable, in Morocco).

Mr. Doumani is still an advisor to a number of high net worth families in the Middle East. 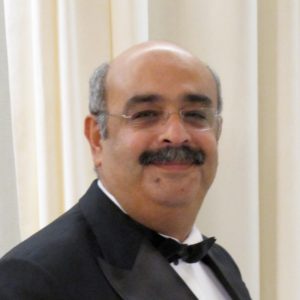